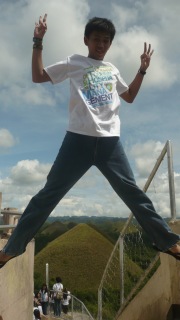 Karl Danielle Reyes Carandang
21 years old
Seeking a new path.
Graduated at the University of Santo Tomas under BS Travel Management
Member of CTHM Batch 2014
Graduated High School from Claret School of Quezon City
Member of Batch Invictus (Batch 2010)
Lucky numbers: 1, 2, 3, 5, 8, 9, 10, 11, 14, 15
Favorite Colors: Red, Orange, Yellow, Gold, Green, Blue, Silver, White, Black, Rockets Red, Pink (when watching anime haha :D)
Nicknames: Karl, kArLc®, Karl C., The C-MAN, Dangers, Caran-Dangers, Carandang-ers, K-Smoove
My journey began in 1994 when I was born in Quezon City, I spent my early life in Batangas in the towns of Sto. Tomas & Ibaan, later moved to Milton Hills in New Era for a few years before moving to my current house in  Sugartowne, Batasan Hills. I started my school life in 1997 at Little Learner’s Heaven (now defunct) in Sugartowne, then moved to The Learning Tree Montessori (also defunct) the following year. I skipped Prep and accelerated into Grade 1 where I studied in St. Matthew’s College in San Mateo, Rizal. In Grade 2, I moved to Integrative School of Quezon City (ISQC). Then from Grade 3 to 6, I studied in Headway School for Giftedness (HSG). My high school was spent in Claret School of Quezon City which is an Catholic institution at the same time an exclusive school for boys. In college, I took up BS Travel Management at the University of Santo Tomas where I finished with honors. I found my first work as a Sales Assistant at Travel Specialist Ventures based in Quezon City. Now, I’m moving on to blaze a new path.
BORN and RAISED in QUEZON CITY
LOUD AND PROUD to be CATHOLIC, FILIPINO, CLARETIAN, and THOMASIAN. FOREVER
I am the eldest son of 4 brothers in our family, unfortunately one of my brothers died when he was only a year old in May 2000.
I’m a very friendly person as I am approachable and happy to be with company of my family and friends! Even if we have differences that we share and encounter in our everyday lives.
I’m left-handed whenever I write and shoot hoops. However, I try to shoot hoops using my right hand.
I play basketball, surf the internet, watch TV, watch anime, read books, read maps, read airline magazines, read manga, take pictures, use Photoshop for my pics, listen to music, play video games and create crazy videos!
I prefer the simple things in life, because I believe that you don’t need to be too fancy about living your life to the fullest.
I don’t like to do nothing around the house, I want to be always active and doing something around at home.
I am sometimes referred as “The Walking GPS”, whenever you want to go somewhere you don’t know where and how to get there. I’ll lend you a hand if you need some help on where you want to go around town (even the entire world).
In my words, I am the happiest SSB (Single since birth) guy in the world and I’m still happy about that because I can still do the stuff that defines my life like play basketball, watch wrestling, talk about anime and other things in life. I am willing to enter in a relationship very soon. But for now being SINGLE is AWESOME. :-bd
I’ve joined a ton of competitions (especially quiz bees) and became the champion in some of these contests. Despite all of that, I always go back to my roots and make myself a better person and I believe I still have a lot of things to prove in my life.

One thought on “The Man Behind Manila Red Nation”

This blog is from the Philippines.

Fired Up Beats Powered By Spotify

K-Smoove's Thought Ladder. A blogger who stands for what he believes in.

Welcome to the thought ladder.

When this blog was created in 2012, it was called
"Never back down, never give up."

In 2014, I decided to rename the blog with the current name you are seeing right now.

The name of the blog was inspired by two things:

"Manila" being the capital city of my home country, the Republic of the Philippines.

"Red Nation" for the name of the the fanbase of my favorite NBA team, the Houston Rockets. Which I have been a fan for over 12 years.

This blog is a storybook of my thoughts and dreams. I like to share my stories to each and every one of you who come by my blog. It tells a story of who I am and my the things I like to talk about in my life like the Philippines, basketball, travel, wrestling, anime, music, sports, and among other topics.

Feel free to browse around and leave a comment on my posts.

Thank You and God Bless,
K-Smoove