Photo ©Cartoon Network
My childhood years have gone and passed, not too long ago. Gone are the days when I watched  a lot of cartoons on television. However, even though I’m already 18 years old, there is one show that is giving me a “second” childhood and reasons to be happy and enjoy cartoons once again. That show is Adventure Time on Cartoon Network.
Adventure Time was created by Pendleton Ward and revolves on the story of the two main protagonists of the show, Finn the Human (voiced by Jeremy Shada)and Jake the Dog (voiced by John DiMaggio) as they head out on adventures throughout the Land of Ooo which will test their brotherhood, determination and willpower to become true heroes of the land.
Other characters include Princess Bubblegum, Lady Rainicorn, Marcelin the Vampire Queen, Lumpy Space Princess, Beemo, the Flame Princess and the main antagonist of the show The Ice King (voiced by Tom Kenny, the man behind the voice of SpongeBob SquarePants).
Adventure Time is truly one of the best cartoons that I have ever watched in my entire life. Who says you’re too old for cartoons? Why not watch this show and prove that it’s never too late to enjoy some cartoons in your life. 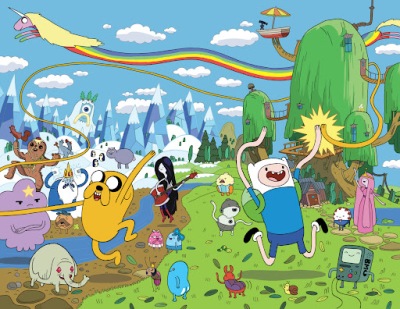 Photo ©Cartoon Network
What time is it? ADVENTURE TIME!
K-Smoove

This blog is from the Philippines.

Fired Up Beats Powered By Spotify

K-Smoove's Thought Ladder. A blogger who stands for what he believes in.

Welcome to the thought ladder.

When this blog was created in 2012, it was called
"Never back down, never give up."

In 2014, I decided to rename the blog with the current name you are seeing right now.

The name of the blog was inspired by two things:

"Manila" being the capital city of my home country, the Republic of the Philippines.

"Red Nation" for the name of the the fanbase of my favorite NBA team, the Houston Rockets. Which I have been a fan for over 12 years.

This blog is a storybook of my thoughts and dreams. I like to share my stories to each and every one of you who come by my blog. It tells a story of who I am and my the things I like to talk about in my life like the Philippines, basketball, travel, wrestling, anime, music, sports, and among other topics.

Feel free to browse around and leave a comment on my posts.

Thank You and God Bless,
K-Smoove